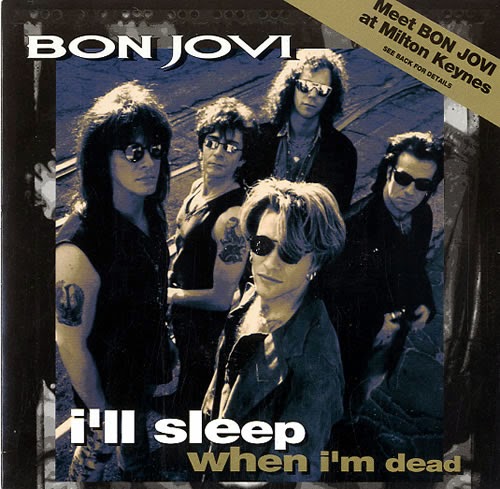 "Gaze of the Black Prince" buff, now that was exciting. The number of Titan Runestones did not seem to have changed during the period and only the guaranteed dropped  as per normal, sigils on the other hand rained down so much that everyone got stuck in the 2nd week waiting for 3000 Valor to clock up.

The major advantage of the buff was the increased reputation gained for killing the Celestials each week. That was so worth the development time that Blizzard spent applying that patch. Stop making it time sensitive just apply it until the next expansion, it is not like we have anything else to do at the moment.

The Grumpy Elf several weeks ago ran a Time Sensitive buff post, I am still trying to get a catchy title, but the following will have to do [We're Crap and We Know We Are] or [The Lion Whimpers] is an Alliance specific buff that allows the Alliance to automatically win the Silvershard Mines when 8 or more of the combatants (used in the loosest possible sense) are queuing for the quest The Lion Roars.

The following story a very sad tale about how my Warlock of Whimpery, having lost so many Silvershard Mines Battlegrounds that I have started doing PvP in order to get the gear that will one day in the future guarantee the Alliance a win. I have now gathered a few bits of additional gear including 2 Trinkets, because everybody needs to be able to remove that mobility debuff so that the Horde can apply another 5 consecutively, sap, stun, silence and fear take your pick it is just one after another in that place. This is odd because everytime I cast fear I see the words "Immune". It is like Blizzard is having a huge laugh at my expense. The worse part of all this is that I seem to be one of the better PvPers on the Alliance side. My Warlock specialises in slow but powerful hitting spells, the only problem that with this is that PvP does not allow you the time to get anything like a rotation off before the first stun comes in.

I get the feeling that every Alliance PvPer is currently blacklisting the Silvershard Mines so only the dregs, the late comers and the alts, without any PvP equipment are standing naked in front of the Horde night after night for a daily dose of spanking.

I am almost tempted to change faction do the quest and then faction change back.

Early on in my Legendary challenge I found a group that traded blows mano-a-mano with Horde, I ended up with role of seeing the cart home down the shortest track to the lava pit. I did this with aplomb and rest of the Alliance tried to steal a second cart whenever possible. The plan was working well and we finally took 2 carts with clock close to striking 1600. Until right at the death the Horde captured the cart and won the fight. 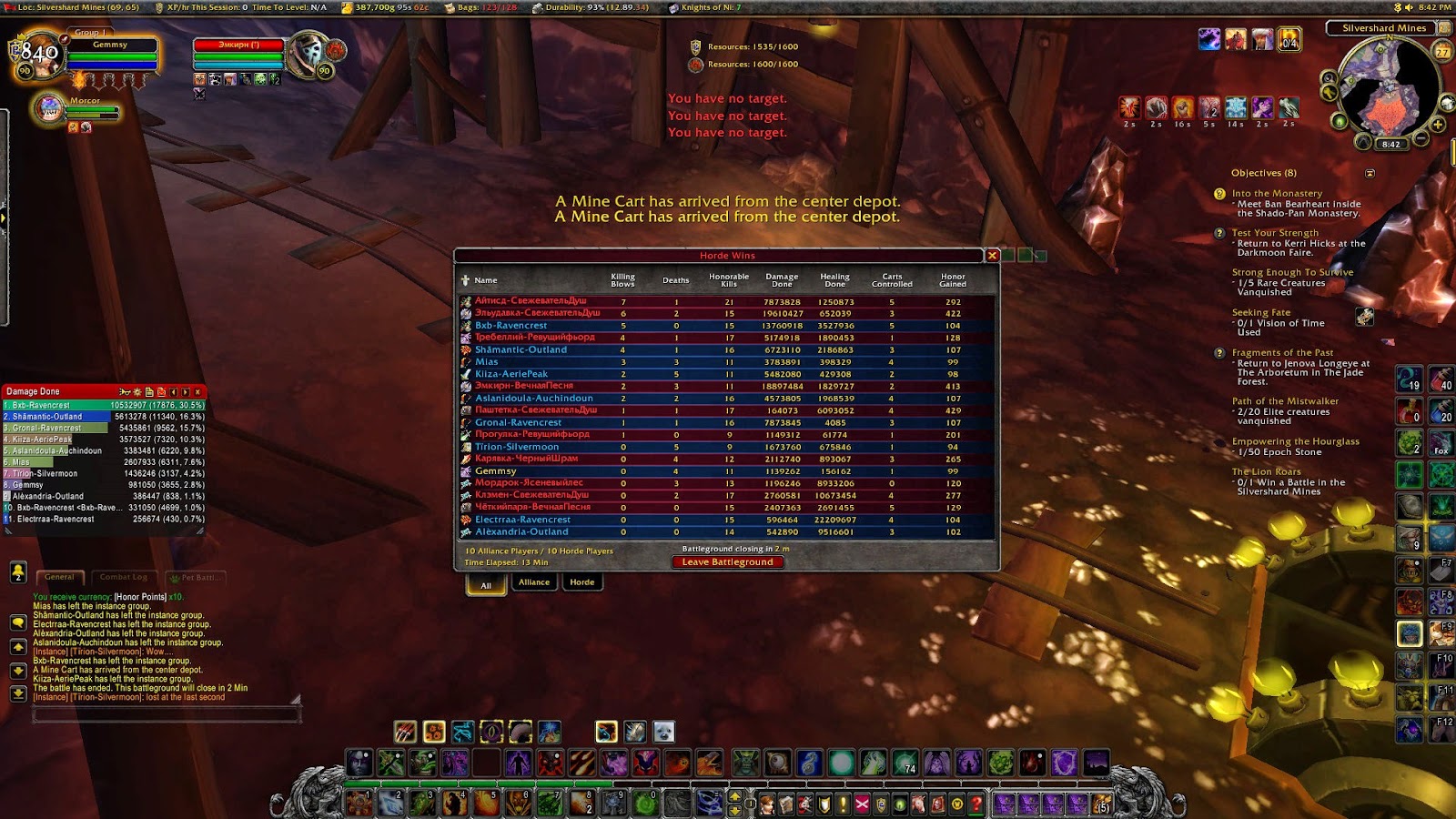 65 Points was a complete downer and since then I doubt that I have been in Battleground were the Alliance are within 1000 points.

If Blizzard think that PvP for PvE players will give people a taster session and then they will be smitten, then they are dreadfully wrong. I am doing PvP in the hope of gathering enough gear to haul the sorry asses in the Alliance over the finishing line. I certainly don't see too many of my Brothers in Arms putting that kind of effort in. They expect to turn up and be carried through, and thinking about this rationally it is about time that PvE gear can be used in PvP without us being a punch bag for those that prefer to PvP every night.

The safest places I have found to gather Honor Points is old content. Tol Barad, Wintergrasp and Grizzly Hills all offer honor for those of us who want to solo our PvP content.

Blizzard have recently done an extended maintenance period. I have yet to find out exactly what they have been up to but I get the feeling that someone found some dodgy memory in his draw and thought he would test in my European server, because the game has become immediately more unstable.

This was my favourite, I got onto my computer early and was greeted by the following screen. Ok it is not a WoW issue but a Blizzard Battlenet problem, but we can all do without this kind of service.

Another of my favourite glitches with the game is the cross-realm open raid, used extensively for Ordos and Celestial bashing. What happens is that the Raid members can see dots on the minimap but seem to inhabit a different world to the rest of the raid team. The solution is to drop group and try and find another group. Invariably you just end up being picked up by the same team that you just left. This is the time to do something else and come back when the participants have worked it out or given up.

We are know how much Blizzard likes to see PvEers PvP, so not just content with Achievements and Legendary quests, they have invented the Open Raid where PvPers who live on a PvP with 10 other people are now allowed to summon other people to their little paradise. The soft unsuspecting PvEer is thrust into a world where it is hazardous to move anywhere without being Sapped by some invisible enemy, who will enjoy nothing more than Stun-Locking you until death occurs. The real soft puddings will demand a summons or will drop group, but they will be tarred with the 5 minute mark of shame (marked for PvP and like being hogtied and slow roasted over a roasting pit). The harder (more stupid) PvEers make our tortuous trip from the Celestial Courtyard to Ordos' Lair, hoping that we are invisible to all Horde but knowing full well that we have a Hunters Mark on our heads.

If we ever get to cross the broken bridge we have a new very deadly foe, in the form of the Kamikaze Horde member than will gather every Kilnmaster and other nasties and then deposit them on top of the raid at the same time as annoying Ordos to come out of his slumber. The result is Fire and Brimstone on a massive scale and the Kamikaze Horde is happy to keep stoking the fire by adding more and more adds to the mix.

What king of player wants to undertake such acts of sabotage? Do they wake up and think, Garrosh, nah I am fed up of subduing is puny ass, Today I am going screw the Alliance over for as long as possible and rack up 100's of Gold in repair bills.

I was wondering about Beta access to the Warlords of Draenor and could understand why I was excluded from Friends and Family, but what about the Beta? I write about the game why not?

I checked my e-mail nothing there, what about my settings in Battlenet? 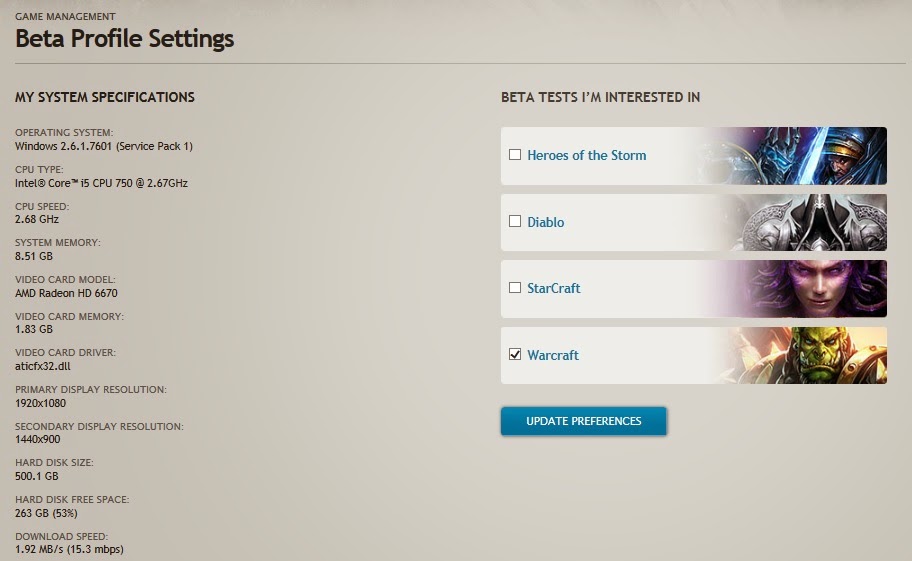 How did I know that you had to opt in? Two years ago I pledged my allegiance by doing what I do every year, which is paying Blizzard for a 12 month subscription.

Anyway if Blizzard want someone to test WoD on older hardware, I am now official available.