I Wanna Be Sedated 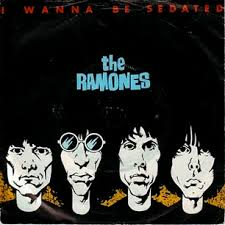 According to the official sources, the current WoW player base for the 1st Quarter 2014 was 7.6 Million. A figure that puts it way above it's nearest rivals but a considerable drop from the heady days of WotLK and the 1st Quarter of Cataclysm. As a player do we want WoW to be as successful as in the past? Stay at the current levels with consolidated Realms? or for Blizzard to need to actively seek new players? 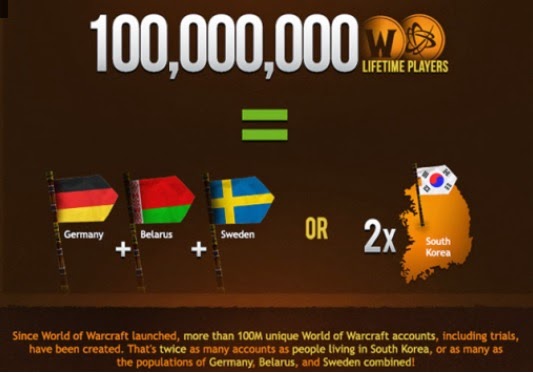 The Blizzard book of Stats unveiled some spectacular figures for us to digest. Only 7% are still playing the game, so even if you start stripping out the free accounts and the Gold seller accounts it is a large number of people who are familiar with the game.

What happened to these people? Did they...
Not all these scenarios are good for Blizzard, and their target audience is only a small percentage of the 90 Million that have tried it and no longer play. The target audience is made up of people who come back for a new expansion and people who have never played it.

These two very different audiences have very different needs, and it can be argued that the more expansions the larger the barrier to entry for new players might be. My boss at work who is a serial gamer, but who has never played WoW. He has however played the big franchise MMO's like Star Wars: The Old Republic and Lord of the Rings. His teenage son is striking out and started playing WoW and dragging his father with him. Perfect target demographic, an old gamer and a teenager, but what is there in a 10 year old game for these two individuals?

The electronic starter pack is a level 20 character free demo. My boss skipped this and bought a combined expansion pack including Vanilla, The Burning Crusade, Wrath of the Lich King and Cataclysm all for the princely sum of £5. This will lead the new player up to Level 85 and will need to purchase Mists of Pandaria and Warlords or Draenor. By my reckoning that is going to be £20 for MoP and £45 for WoD.

For £5 you get a lot of game but the rest is a large chunk of change in one go, that would probably put off a large percentage of players. I would guess that they need to drop MoP to around £5-£10 or else they can expect another large tail off of numbers.

The World of Warcraft is empty. There is one capital city for Horde and Alliance a few hangouts in MoP or Timeless Isle. The rest of the world is just so empty, and that is not a good experience for and MMO. Teach people to play in a solo vacuum then feed them to the lions at max level. I can see the need for boosted max level but why not boost for 60-90 rather than 1-90. Get some extra value from the Cataclysm revamp.

Apparently fresh eyes are telling me that the requirement for addons for a new player is on the heavy side. Who today would even attempt to play without addons like we used to after every patch. Blizzard need to adapt more core addons and make them optional, immortalise the writers in game and use the code.

Movement is just too damn slow, I can live without flying mounts but walking at low level is painful. It is bad enough getting around Stormwind never mind some of the zones.

My boss complained about minimap directions, stating that points of interest should be highlighted by mouse over, and the general guidance for skills and professions is very poor. The starter zone is not just a small area, it should include a city tour and professions. It is like passing your driving test and then letting you drive on your own on a motorway/freeway without tuition.

In some respects it would be nice to see the game through fresh eyes but unless I meet someone from MiB armed with a memory eraser, then that is not going happen.