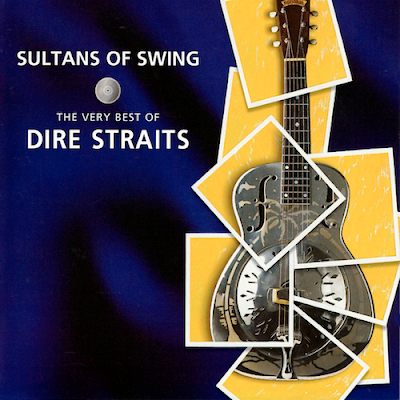 Yesterday I received a little bit of traffic to my blog. Tobold is one of the most respected bloggers on all things MMO. I am regular reader, even though I only have a passing interest in the other games in the MMO genre. I am a monogamous WoW player except for a brief liaison I had with Diablo.

Tobold was very supportive during the New Blogger Initiative, and helped me to create a focus for the Blog. The gist of what Tobold said was "The world is full of WoW Blogs, if you are doing this for purpose of attracting visitors, then pick a different subject, something in Vogue".

I have no interest in playing another game just I can write about it, just because it is a hot topic that is not a subject that is 9 years old. I consider this to be like a football supporter who supports Bolton Wanderers writing a blog about Manchester City, just because they are the next big thing.

Yesterday I received triple my usual traffic to the site, and it shows how astute Oscar Wilde was writing in 1890. The thing I noticed was that with all the media talk of cyber bullying and trolling, nobody left abusive comments and I thank you all for your politeness.

Moving on to the post I was trying to write yesterday.

Another weekend over and I am just trying to catch up with WoW news and associated Blog stuff, and I re-read the comments from R on the post about Connected Realms. This got me thinking about load numbers for the Realms and how many Realms are likely to be connected.

The first place to look was the Realm Status page on the European Battle Net server. I chose Europe based on the fact that there are probably slightly less players and it is home turf. The Realm Status page allows a certain amount of filtering so I continued down the route of what I know best.

42 English speaking, PvE Realms in Europe of which only 4 are highlighted as High. All the rest are indicated as Medium. 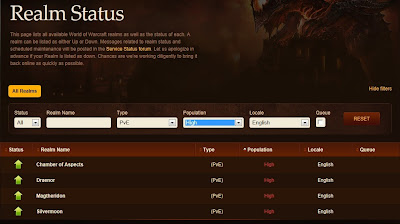 The issue that Blizzard have is not the number of accounts on a server, because the primary concern is the average number of concurrent users and in particular the highest number of users at the peak of the day. If you merged an Australian Realm with a US Realm would it achieve anything if the peaks are at different times of the day.

I previously questioned why we are not given more details about the Realms that we reside on, what does High or Medium actually mean. I am not interested from the point of being able to calculate how many people are on all the US realms and the European Realms, so that we can breakdown the fact that Spanish Realms are seeing higher levels of people leaving the game. I am merely wanting to know from a game experience, am I better on a High population realm or a medium realm? the Grumpy Elf was right of course that any detailed information would be used against Blizzard to denote the collapse of the WoW brand, pretty much like I did last week.

If all the PvE servers in Europe are medium population at the least, what kind of population do Blizzard think we should be playing on. Do we need to connect 2 medium realms? or 1 high with 1 medium? or 2 high = 3 medium? My point is we don't know and to be honest this is not the kind of testing that can be done a PTR. Are we all going to change our hearthstones to Dalaran, Shattrath or some place else, because Orgrimmar and Stormwind have become lag central. I am sure I don't need to remind some of you what it was like in Shattrath and Daslaran at peak times.

Are connected Realms going to be permanent connection or are they going to be free flowing depending on realm populations over time. What happens if a a connected realm starts to have large combined losses of subscriptions?

Blizzard are being rather vague on many of the issues and the generic Blue post did very little to answer anything but the most superficial questions.

This function is in development now and once Patch 5.4 hits the live servers, then all attention will be on Connected Realms. Blizzard have staked too much on this for it not to go ahead.