I have often discussed stat inflation and how gear can very quickly make challenging content trivial. I was not however expecting the size of the jump from my last upgrade. My hunter gear is starting to become a little more epic as the weeks go by and I have put a temporary halt on my levelling project.
My gear is self made Leatherworking PvP set, with Jewelcrafting Rings and Necklace, rounded off with a Crossbow from Arena of Annihalation.

The general recommendation for people gearing up, is to Valor cap each week (1000). This was not working for me because The max amount of Valor that can be owned is 3000 and I had no reputation at a suitable level to spend any of it. 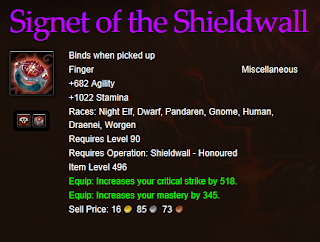 I was expecting the rewards at Honored to be Justice points, but discovered that the available gear upgrade was in fact the Signet of the Shieldwall. What surprised me most was the iLevel of the Ring being 496.

If you compare this to the last expansion most of my gear was 397, and this appears to be high in terms of the current status of the expansion. 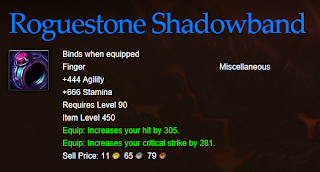 I have already stated that I was wearing an entry level Jewelcrafting ring: The Roguestone Shadowband.
+ 238 Agility
+ 356 Stamina
+ 231 Crit
+ 345 Mastery 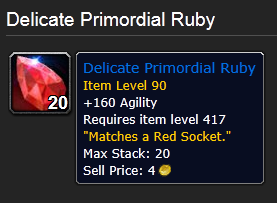 These are not small incremental upgrades, they are monumental leaps in stat inflation, and it explains why newly levelled 90's are doing 25K DPS and the people with Epic gear are doing 100K DPS.

This is just the tip of the iceberg when you consider that the Delicate Primordial Ruby adds a whopping +160 Agility plus any socket bonuses.

Now it is starting to make sense about all the talk of Mega Damage. I am just curious why we needed to jump from 450 - 496 in such a small time frame?
Posted by Bob at 12:13