The State Of The Union 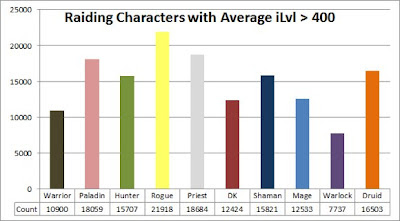 The above graph is from Wowinsider who in turn stole it from GuildOx. The Graph is very interesting and focuses on those people who have obtained an average PvE iLvl of over 400 (heroic Dragon Soul). The runaway class partaking in Heroic is the class with Dual Wield Legendaries, big surprise for all those that dusted off their Rogues.

The middle ground is occupied by Priest, Paladin, Druid , Hunter and Shaman. No real surprise for the 2 true hybrid classes of Paladin and Druid, or for the ever popular Hunter class, however Priest and Shaman is a bit more of a surprise, though I guess there is more need for Healers than Tanking classes.

The ugly ducklings are Warrior, Death Knights, and Mages, bringing up the rear is no surprise Warlock. Cynwise has recently been writing an excellent series of articles on the reasons behind the dearth of the Warlock Class.

The graph above is a census of Level 85 classes pulled from Warcraft Realms.com. The 2 most obvious points are that Rogues are massively over represented in DS Heroics compared to the percentage of Rogues at max level, and that Warlocks really are in a very bad place. Also it is interesting to note the normalising effect on Death Knights during the course of Cata. The number of max level DK's is only 11% compared to their hugely popular status during WotLK, and they are not well represented in the Heroic Dragon Soul category. 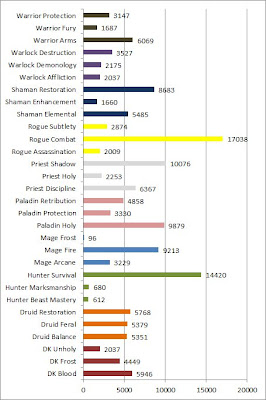 The graph on the left shows the breakdown of the class specs and provides a real insight into what is going on in the raiding world at the end of this current expansion.


Although difficult to judge it would appear that Protection Warriors are just about holding their own in the Tanking stakes. Arms Warriors are viable, but Fury Warrior is in a very bad place.


Cynwise has suggested that there is not a lot to choose between the 3 specs, with all 3 viable and none of them outstanding. Maybe if one was outstanding people would return to playing the class.


Resto Shaman is by far the dominant spec for raiding. Elemental makes a reasonable showing with a poor showing for Enhancement.


There appears to be a slight leaning towards Combat Rogues with more than 3x the other 2 specs put together.


Possibly the most interesting class in this study, is the fact that for a class with 2 healing specs it is the Dps spec that is the dominant Raiding Spec. The once dominant Holy Priest is consigned to minor spec, with Discipline taking over as the healing class of choice.


The Healer of choice for the raiding fraternity. Once the creme de la creme of the Tank Healers, Now coupled with a useful toolbox for AoE healing, they are the most popular single spec healers. Retribution is positioned as a middle of road Dps class, and Protection is an average Tanking class.


Fire Mage is the stand out spec, with a handful playing Arcane and Frost are sat on the sidelines in a bucket of ice.


They have been up and down in the popularity stakes for 2 expansions, but Survival is now the top dog. BM has been buffed to be as good as MM, and MM has been nerfed to be as bad as BM. Now they have both been deserted in droves.


This is one class with equal participation throughout. The one issue is Feral, are they Cat or Bear, and the answer is we don't really know.


Last but not least, the once skeletal masses have moved on to other classes, but it looks like Blood is the number one tanking spec.


Tanking and Healing looks to be in an alright position, but the Dps specs seem to be all over the place. Combat Rogues, Fire Mages, and Survival Hunters are sitting pretty at the top, one assumes that the Dps charts mirror this picture.

The classes needing some attention as a whole are Warlock and Death Knight. In case anyone needs reminding there is a new class on the way that needs balancing.