All Along The Watchtower 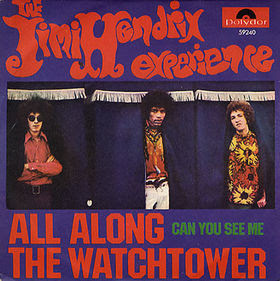 Not intending to logon to my only level 90, I had the best of intentions of levelling my Death Knight instead. I thought I will just logon get my flying skill up-to-date and logoff.

For starters I had a noob moment and flew to the wrong Flight Point in Vale of Eternal Blossoms, and ended up on the wall at the far left of the map, instead of being at the far right (so that I could learn flying). The idea was to unload some of my Archaeological finds with Lorewalker Cho and clear some space in my rather full bags. The worse thing was I didn't even know that I was in the wrong place. I clicked on some quests with the zeal of a man faced by a plethora of yellow exclamation marks, and then scaled down a rope without a second thought. It was only at this point, did I fully understood the stupidity of what I had just done. I was rewarded by finding an abundance of dead animals to skin and ended up far longer on the wrong side of the wall than intended. Also I could not find anyway to get back to the right side of the wall without Hearthstoning back to Stormwind and making my way back by kite.

I eventually found myself at the Shrine of Seven Stars, and for the life of me could not remember where I had seen the Flight Trainer. Having run past the trainer about seven times I finally managed to get my flying skill and wandered over to see Lorewalker Cho. I handed in 3 perfect Artifacts by placing them in the Lorewalker museum at the Mogu'shan Palace. I even tidied up a bookcase and handed in a newly completed artifact, and still Lorewalker Cho is unimpressed. Not a single reputation point I have earned from my activity. 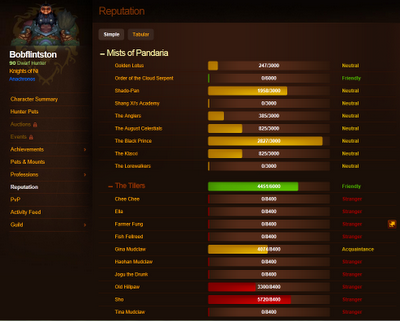 I have earned more reputation with the Black Prince, for having a drink with him whilst he explained his plans for world domination, with his white cat in hand (No, I expect you die Mr Bond). Not sure I trust that one an inch, but if he wants to give me a Legendary who am I to complain.

Next up was the Tillers, who are finally warming up to me. I had no idea what I was doing on the quests, and no doubt they will change again before I work out the quickest way to complete these dailies.

Being able to fly now, certainly improved my ability to get to the Archaeology digsites. Now I am not sure if this is intentional or not, but you currently get 1 skill up for every fragment. That is 6 skill ups per digsite plus the 3 for completing an artifact. No excuses not to level now it is super fast. This is only confirmed for level 525+ in Pandaria.