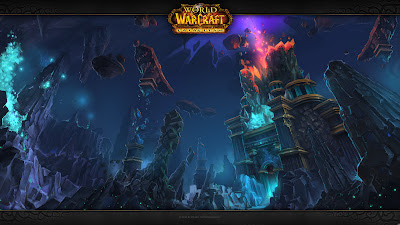 Previously I stated how annoying Shoulder Enchant Rep grinds can be. Blizzard fixed this in WotLK by making the enchants Bind on Account, thereby allowing all the alts in your stable to be able to fully enchant all their gear. All of my alts followed similar paths whilst levelling:

Since I wrote the original post on how I would not be grinding 9 characters through Deepholm, I have of course been doing the opposite. So far I have steered half of my team through the dark purple area known as Deepholm, and I am surprised by my findings. Deepholm is quite a good zone. I can safely say it is vastly superior to the long watery road to hell that is Vashj'ir. Back at launch Murloc Parliament described the zone as Deepholm: It is like Netherstorm except really depressing.

For those people suffering from short-term memory loss, Deepholm is a deark forboding place with splashes of bright vibrant colours (see pictore above). The zone is fairly evenly divided by the 3 seperate quest chains to retrieve the World Pillar initiated by the Earthen Ring. The first part is help the Earthen defend their homeland against the Troggs. The second part is uncover the cult of the Twilight Hammer, and the last part is the befriending of Therazane's Stone Lords. Of course the objective of all this is to achieve the last part of the quest. With the portal in Stormwind and Ogrimmar it is easy to dip into this zone whenever the mood takes you.

The reputation grind starts at Hated and will move in very large chunks until the quests stop just shy of revered status. At this point grab a tabard and if the mood takes do some Dailies. Personally I think that is step too far.

As well as gaining the right to enchant your shoulders, there are some impressive side effects. Doing quests at max level will net yourself a considerable chunk of change, also the zone is usually devoid of other adventurers and there are plenty herbs and ores up for grabs. The zone is home to Heartblossom and due to its unique status makes this herb worth more than the more plentiful Whiptail from Uldum. Surprisingly for a lower level zone of the expansion I have found plenty of Rich Elementium Nodes. One other advantage of this zone is the abundance of closely packed troggs waiting to be AoE'd into oblivion for the quest Test Your Strength and for the seasonal quest to make Lovely Charm Bracelets (Love is in the Air).

I can safely see all my characters leveling through this zone in the months ahead, and in some respects I am even looking forward to it.