Yesterday I discussed some approximate levelling times for the new expansion. The Grumpy Elf left his customary comment yesterday, and it left me wondering if I was actually doing something drastically wrong. The figures below are not verified (that would take way too much time), but they appear to approximately correct. The data is from the Ascendancy website and shows the quest rewards for each of the zones and the associated mini hubs.

The Grumpy Elf thinks that it is possible to level from 85 – 90 in 12 hours. Which would require a colossal 8,125,000 XP/hour. My suggestion was for about 40 hours which would require a far more modest 2,437,500 XP/hour.
In the interest of science, I decided to run a test to see what kind of XP/Hour I could reach if I went for broke and tried to maximise my levelling experience in a short time frame of about an hour.
The scenario was as follows:
The start of the zone involves 2 quests and lots of mob killing through the cave system. The two quests are Educating Sarok and Robbing Robbers of Robbers. My method of calculating XP/Hour is the built in app in Titan Panel, so I flew to the flight point and then logged off and back on to reset the timer.
The first few kills set the XP/Hour into overdrive, but the figure soon settled down to around 3 – 4 Million XP/Hour. Handing in the quests spiked the system to over 5 million, but the next quest, The Spring Drifter is a slow boat ride to Kun-Lai Summit, which obviously sent the figures plummeting. The XP for a level 87 killing an equal level mob is 29,972 XP with mining providing 16,402 XP per node.
I quickly collected all the quests in the area and in an attempt to increase my speed I was a little more reckless than usual and threw myself into large packs of mobs. Warriors have great regenerative skills, but Arms is ultimately a DPS spec and not a tanking spec and my reckless approach did result in 2 deaths due to misjudging the number of opponents.
In the end I settled into a quicker than normal tempo and eventually stopped after completing Binan Village and Westwind Rest. The time taken was 1 hour 20 minutes and the results can be seen below: 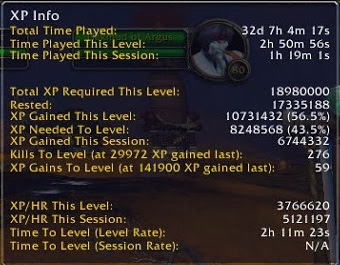 The most important figure is near the bottom XP/HR This Session 5,121,197 which is way above my usual dawdle speed of 3,766,620 XP/HR which includes going AFK for cups of coffee and snacks.
Using these figures shows that at my usual speed it would take 26 Hours to level from 85 to 90, but at the new improved speed it would only take 19 Hours. The question is could I maintain that pace for 19 hours and I think the answer is probably not.
At a pace of 19 or 20 hours to level a character, that means that even I can level to 90 in a week with my restricted playtime.
In summary I massively overstated the time required, but I also believe that I would find it impossible to reach the XP/Hour that the Grumpy Elf thinks that he can obtain.