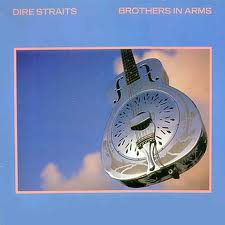 Just in case you are curious as to how I get the titles of some of these posts. My last article without a musical title was the 18th June, and all subsequent posts have followed my signature "Rock 'n' Roll Warcraft". Here is a small insight into how my mind works and my thought process for the current post.

The choice of Brothers in Arms comes from the topic the Tillers. The Tillers are farmers and I want to talk about my farm. Oddly enough I don't know too many songs about farms, and I refuse to use Old McDonald. One option was "All Together Now" by The Farm but the one that kept popping into my head was "The Fog On The Tyne" by Lindesfarne, but that is just wrong because it's farne and not farm.

The choice of "Brothers in Arms" comes from the lyrics to the first verse:


"These mist covered mountains
Are a home now for me
But my home is the lowlands
And always will be
Some day you'll return to me
Your valleys and your farms
And you'll no longer burn
To be brothers in arms"
Mark Knopfler
The imagery﻿ of the mountains and valleys, and the farmers leaving their families and their farms to head to war, seemed to echo the turmoil facing the peaceful farmers in the Valley of the Four Winds.
Anyway back to Warcraft, I have not partaken in Pet Battles for the sole reason that I have got too many other things to worry about, I have not investigated what mounts and pets are available, and this is just the icing on the cake for when I have completed the more important priorities, like levelling, rep grinds and gearing.

One article that did attract my attention was the Terrible Turnip from a WOW Insider post dated 31st October.
"Unfortunately, whether or not you can get your hands on the Terrible Turnip is a matter of luck. It isn't a pet you can catch out in the wild and it isn't a pet you can acquire via boss drops or a trip to a vendor. The Terrible Turnip can only be acquired via your player farm in the Valley of the Four Winds. Any time you harvest one of your crops (and as far as we know, it's any crop), you have a small chance to loot an Ominous Seed. Plant that seed, and the next day you'll find a fully grown Terrible Turnip, ripe for the picking."
I had just looted an Ominous Seed the previous night and planted and still I didn't make the connection, it was only when I went to harvest the Ominous Seed that the penny dropped. I felt I should go back to investigate what I had been fortunate enough to receive. This appears to be a very important Battle Pet for capturing rares in the wild. I will place in storage until such a time that Pet Battles seems more appealing.
The other big event was achieving Revered status with the Tillers. This was a bit of a surprise, I was expecting a much longer reputation grind. I have purchased my Irrigation system and automatic bug spray which should make life a little less stressful down on the farm. I also just noticed that the Godmother wrote about it on the 8th October, which puts me 3 weeks behind the curve.

Email ThisBlogThis!Share to TwitterShare to FacebookShare to Pinterest
Labels: The Tillers