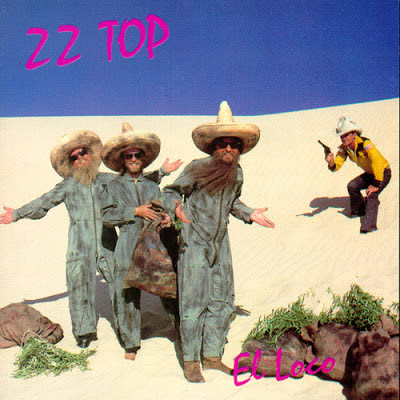 I was a little reluctant to search Google Images for the above picture. In case you don't know Pearl Necklace has a slang meaning, which might not be readily accepted by a Proxy Firewall.

I have had a little downer on Darkmoon Faire and the Seasonal Events, but if there is gear to be had, I am going to be first in the queue to indulge myself. This week we have Love is in the Air, to correspond with Valentine's Day. The celebration in the Real World has always been very commercial and the buying of mass produced greetings cards seems a very false way of demonstrating your love.

In game we have a chance to win (very slim chance) a Love Rocket, a pink 2 seater flying mount, but right now everyone seems to be more interested in scrapping over one of five necklaces that drop from the Chemical Co encounter. 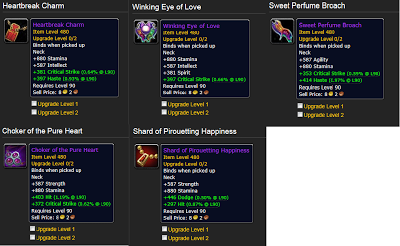 The 5 necklaces at iLevel 480 cover the usual bases of:
Judging by the flurry of activity and the moans and groans from the people on their 10th run of the day to get a Necklace, there are a lot of people who have not managed to pickup better necklaces from the Reputation Grinds. Both the Klaxxi and the Golden Lotus have iLevel 489 versions. The Golden Lotus version is a reward for completing the quest The Final Power. This means that the people running the Chemical Co are
I am guessing that if you need a iLevel 480 Necklace on a main character at this stage in the expansion, then Blizzard have got this expansion very badly wrong. In my opinion I should have all my alts that have completed up to Exalted with the Golden Lotus, but as the Grumpy Elf has pointed out on numerous occasions that the Golden Lotus is the most detested of all Rep Grinds in that it takes forever and the rewards do not correspond with the effort.

iLevel 480 gear seems to be pitched firmly at starter set gear, and this is closer to were the Honor rewards should have been not 450 Blue gear.

I like healing this seasonal Boss(es) due to the obvious nature of people who are incapable of moving out of the bad stuff. Scenarios have taught me one thing at least, that your health is your own responsible. Do not expect somebody else to wipe your bottom for you. Healers are there to keep the Tank alive and deal with splash damage to the party not heal through lazy DPS thinking that moving is an optional requirement.

Why do Plate Wearers keep taking Agility items? did the game change and nobody told me?
Posted by Bob at 13:57

Email ThisBlogThis!Share to TwitterShare to FacebookShare to Pinterest
Labels: Love is in the Air, Necklace