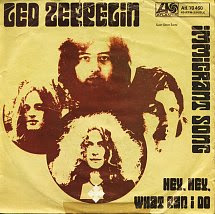 Apologies for the lack of posts in the last few weeks. It is not that that I haven't been writing them it just that I have not finished them. I have had several posts in draft form and so it is my job to determine if they are still worth posting or not. The reason for my tardiness is simple, I am just too damn busy at work since the Christmas break. January is the new financial year and a chance to spend large amounts of money on new servers, laptops and desktops.

This post was originally started when I first arrived in Northrend at level 68. I was enjoying myself in Nagrand at the time, but I received the call from the King and set forth from Stormwind Harbour.

The step up from Outland was non-existent, and if anything I suspect the starter zones have been nerfed slightly. Being able to fly allows quick movement into quest areas and I can see why Blizzard likes to restrict flying for expansions and new zones.

On arrival at the Borean Tundra, I took the screenshot below. 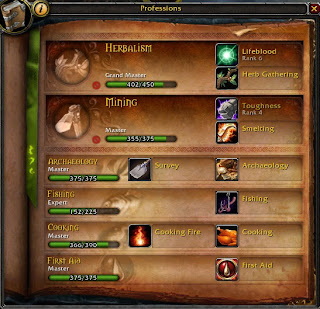 A familiar pattern was emerging, with Herbalism being above the old 375 for the Outland expansion, and Archaeology and First Aid were exactly were they needed to be. Cooking and mining are slightly below the requirement but are within 25 skillups which allowed for the next tier of training. Fishing of course is lagging behind, but this is not an issue.
I completed half of Borean Tundra before swapping to Howling Fjord. I completed this zone until I reach the achievement I've Toured the Fjord which is a staggering 130 quests, before moving to Dragonblight and doing sufficient quests to get to Level 77 and then onto Sholazar Basin.
I was able to complete 3 levels in the Region due mostly to herbing and some mining. There is plenty of competition for resources, but then again there are a lot of resources. I am still surprised to see max level characters fighting with the monks for Adder's Tongue and Saronite Ore. Have these people got nothing better to do?
In general Northrend like the Outlands is still a good place to level, even on the 11th occasion. I did plan to do more instances than just Utgarde Keep, but I just kept rolling through the quests instead.
I finally ran out of money to pay for the last flight skill of 5000G. being short by only a few hundred gold. I decided to dip into my treasure trove and have not left my Monk penniless and destitute, although that would possibly be a good Role Playing choice.
Posted by Bob at 14:14

Email ThisBlogThis!Share to TwitterShare to FacebookShare to Pinterest
Labels: Northrend