We are now into week 2 since the "Oh crap we need to do something patch", and for the next few weeks this is going to dominate the game that I play. I am not sure how much of an impact because last week was curtailed with a short stay on the outskirts of London. 2 nights in Slough is not what most people would choose for a short trip, but the hotel was within a stones throw of Windsor Castle and Legoland Windsor. Much fun was had, and these days I am able to switch off from WoW without any problems.

Just in case you have not found a reason to go to Legoland, it is ideal for children aged 7-14 and of course big kids of any age.

Before going to Windsor, I managed to valor cap all my alts on Sunday night. I was required to dig deep into my mound of Timeless coins, but at this rate of expenditure I am going to be dreadfully short of Timeless coins after a few weeks, so much so that I might need re-adjust my strategy.

Very few of my characters had been sitting on spare Valor points prior to the patch dropping and so I am going to be much nearer to 8 weeks to upgrade all my gear than the 5 weeks I hoped it would take with 3000 valor already in the bank. According to Navimie, I am weak willed for not having a stash of valor ready to spend at a moments notice. I guess we are all going to be running on empty for at least a few weeks, not that anybody is holding their breath for this new expansion.

One thing I noticed during the upgrade process was the number of items in my characters possessions that are not from 5.4.

"All upgradable epic items introduced to the game in Patch 5.4 will be given the option to upgrade 2 more times for a grand total of 16 item levels."
Most of my casters were able to get a decent weapon early on in the expansion due to the Inscribed Serpent Staff being available at all good Scribes near you. 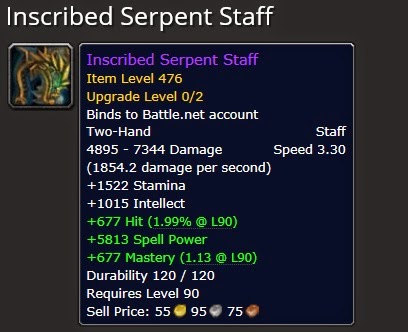 This was a considerable saving on the marginal upgrade of the Cloudscorcher Greatstaff, which required another 20 K Timeless coins. Now the Timeless coins are in greater demand any weapon upgrades are going to be pushed to the end of the queue or more likely a few runs through LFR in the hope of something better and the farming of 1000 Valor for the required upgrades. 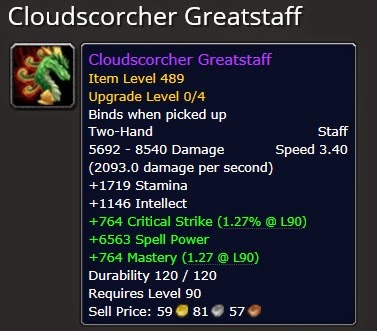 For the player with only one or a small team of alts, the Deeds of Valor is a great lifestyle choice, but for the more discerning altoholic, we have a new meta game in town, and it looks like filling the summer months quite easily.

Having anything to do is an improvement on what the Grumpy Elf has been discussing, after the alleged mismanagement by Blizzard. The weeks keep going by and the expansion seems like it is farther away than ever. If we are lucky we might get a Beta release to co-inside with Blizzcon, although I am not saying which Blizzcon that might be.