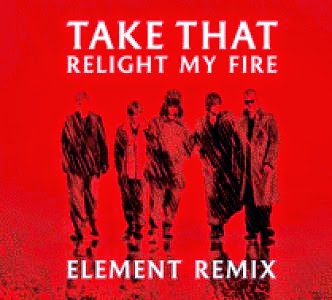 The Legendary Cloak has set off a chain reaction in the way I play. The Cloak gives me the right to kill Ordos every week on all my characters. New gear requires upgrading so the lucky recipients all need to farm 500 Valor per new item. This is leading to new methods of Valor farming, which includes dailies, including the Isle of Thunder, Timeless Isle weekly quests, and earlier LFR raids.

The Isle of Thunder is interesting, especially when you are only inhabitant on the island. The main advantage of the zone is the chance to gain reputation with 2 factions that you have not had very much contact with since patch 5.4 dropped, Kirin Tor Offensive, Black Prince. If you run a few Throne of Thunder raids then you complete the circle and increase your reputation with the Shado Pan Assault. By doing these 3 reputations then elements of the Legendary Cloak will start to assemble on your Alts.

My chosen character is my Gnome Warlock, much maligned in the past and left to rot first as a character for my daughter, and then later as a Bank Alt selling Glyphs. The improvement in the class is absolutely amazing seeing as Warlocks almost disappeared during Cataclysm. This places my Warlock in terms of favouritism in fourth place behind Hunter, Shaman, and Mage.

Due to the low status of Warlocks after Cataclysm, I levelled my Warlock near to the end of my list priorities, but my feelings have grown steadily since November 2013. I was originally only interested in obtaining max level characters so failed to concentrate on the reputation grinds, which had been hard work on one character, never mind the whole team.

Waiting for the older LFR's leaves a fair gap to fill, and so the twin pursuit of reputation and valor is my goal. Not all of the raids are fully opened and many of them need completing in order to make the next Raid available. The Terrace of Endless Springs is still regularly visited as part of the Legendary questline. One thing that I noticed was the high drop rate of Sigils. 3 from one Raid was a very tasty start, and all the encouragement I needed to continue the process. Drop rates are much higher than during my original foray through these Raids, but not all proved as productive as The Terrace of Endless Springs.


During one of my trips to the Isle of Thunder, I encountered a Rare in the shape of Haywire Sunreaver Construct. After looting the body I checked to the stack of goodies and discovered the Sealed Tome of the Lost Legion. 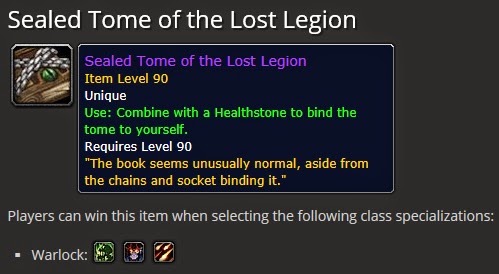 Having a hunch but not knowing for sure, I immediately decided to combine the Tome and start the questline. Playing WoW during the day can get me into hot water with my wife and to a lesser extent with my children, and this proved to be an horrendous occasion. Most of the quest can be done in small chunks but towards the end there is a solo scenario through the Black Temple. This is a raid that I have done only twice before and would be the first to admit that I have the ability to get lost in this sprawling 25 man Raid.

I struggled with the maze having done at least 20 separate attempts. I have killed the Disembodied twice. I have bugged out on the looting the relics once and my wife rebooted the router on another occasion.

The final boss however proved to be beyond my capabilities. It relies on using the entire Warlock toolkit, and for somebody who is merely a tourist to the class, I severely lack the muscle memory to control a demon and keep myself alive whilst trying to lay down some damage to the boss.

Although I am totally unable to achieve the task in hand, it is important to stress how special class specific questlines make the player feel. I never got to experience the Fangs of the Father, but I suspect they felt a similar warm and fuzzy glow. It is a long long time since Hunters have felt that special.
Posted by Bob at 16:20

Email ThisBlogThis!Share to TwitterShare to FacebookShare to Pinterest
Labels: Warlock