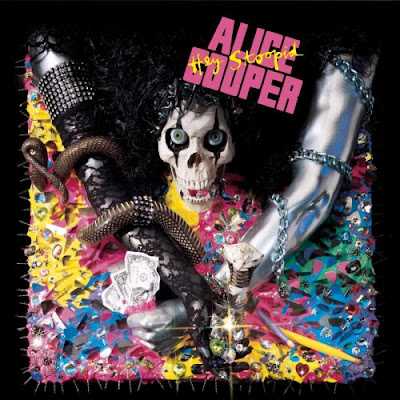 Blizzcon provided a large amount of information, and for those that did not attend or watch the virtual event, it is safe to say we are finally catching up. One small item that slipped my attention is about the Warcraft film, due to my interest being solely based around the game and not the various multi-media surrounding the game.

I was first alerted by the Instance Podcast, when Scott Johnson was disappointed by the Blizzcon panel and the lack of definite details being released. The film is still under tight control, but it appears that the storyline according to Wowpedia is:

"BlizzCon 2013 featured an entire panel on the movie. They revealed that the story was going to be around the time of Warcraft 1, and that the focus was going to be on Anduin Lothar and Durotan, as they felt it was important to portray both the Alliance and Horde. Concept art was shown of Dalaran, Stormwind, Ironforge, and Draenor."

The penny final drops that the reason for the convoluted time travel/time bubble storyline is a complete tie in with the film. The storyline for WoD looks very sloppy and is shoehorned into the game to make the film look more palatable. If you want to see exactly how flimsy the storyline is then I suggest that you read Anne Stickney over at WoW Insider.

I have borrowed the diagram drawn by Anne to emphasize the point. 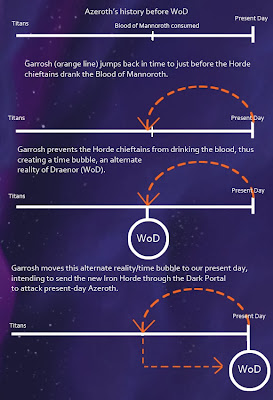 Is this the biggest load of bunkum storytelling you have seen for some time? Not only do they go back in time, they change history and then somehow move the entire alternate world to a different timeline. Even Stephen King would not be so bold.

We have already dallied with time in the Caverns of Time, and the Cataclysm heroics, End Time, Well of Eternity and Hour of Twilight. Blizzard have given up with the idea of an entire continent that can be shrouded by mist, or an Island that comes and goes as it fancies. We are left with the most inconceivable plot line because it ties in with the future release of a film. Quite frankly I am a little appalled at this.

Will it affect the game and will I stop playing? No of course not, but this is nothing more than rampant commercialism. I have heard people saying that the subscriptions will rocket in the face of the new expansion. I think the answer is that nothing will ultimately stop the game sliding into obscurity. At the end of the day nobody would ever have anticipated peak figures of 11 million or that the game would last more than 10 years but it will continue to decline unless the film is a huge commercial success, the new expansion is simply paving the way for the film.

The plotline might be transparent in the extreme, but personally I am interested to see how the lessons of the current expansion are improved upon, and the long awaited Garrisons feature will more than keep me occupied.
Posted by Bob at 16:49