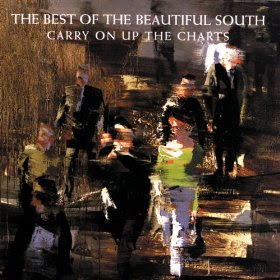 11 Months ago we rushed out of the starting gates in an attempt to speed our characters through the new expansion. Once at level 90 we opted to run hundreds of dailies making up the Reputation grinds. This was an activity that we probably only did on our main characters and not the alts that came through much later.

Now with only a week left until Patch 5.4 drops and a chance to enact some vengeance on Garrosh for all the evil deeds he has overseen in the last 12 months. I have used my time in Patch 5.3 to catch up on some alt time, and just like in previous expansion I have not completed all the original expansion content and merely stopped at level 90 in the pursuit of better gear.

This in reality means that I have Krasarang Wilds, Valley of the Four Winds, Dread Wastes and half of Townlong Steppes to complete. Of these options Dread Waste and Townlong Steppes over the chance to increase our alts standing with 2 major factions, Shado Pan and the Klaxxi.

Dread Wastes was a fearsome place at level 89 but with a bunch of Epics the fear factor soon disappears and it is a nice pace of quest gathering when being attacked by multiple mobs at the same time does not mean having to drop all your cooldowns just to survive. After a nearly a year away from these zones we have become immune to how well Blizzard matched the levelling difficulty of this zone. Stat inflation means we can now wander through the zone with one eye on the game and the other watching television.

The main reason for revisiting this content was due to the fact that my Mage who is my Tailor/Enchanter never got to Exalted with the August Celestials. The Quartermaster of this faction has the following goodies available:


The driving force was ultimately for bigger bags, but I am also struggling for decent wrist enchants with the 3 enchants missing from my arsenal. 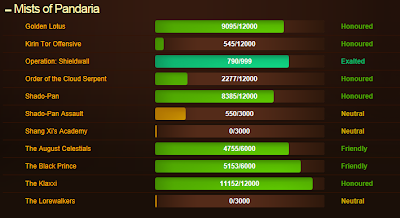 Judging from the above picture, it is going to take a little more work to achieve in a timely manner. Fortunately there is more ways to garner Reputation than the original 1100 available on a Daily basis. I am trying to supplement this by Farming, and championing the August Celestials in Daily Heroics and Scenarios.

I was hooked into helping the Klaxxi and Shado Pan, only by the fact that I had quests that were completed but never handed in. I appear unable to walk past a yellow exclamation mark without taking a peek.

I doubt whether I will be able to sustain doing all the regular quests on more than a couple characters, but ultimately that is more than I managed with either Icecrown or Twilight Highlands. I guess it depends how long Blizzard make us wait for a new expansion without any new content. I firmly believe that Patch 5.4 is not the last one in Mists of Pandaria.
Posted by Bob at 14:53