The Killer Rabbit of Caerbannog 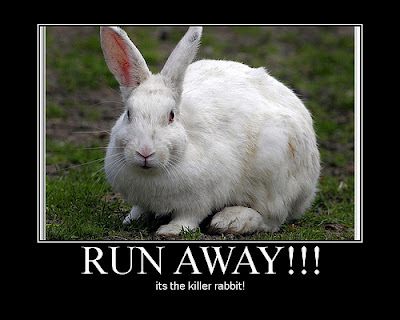 The Killer Rabbit of Caerbannog has made an appearance in World of Warcraft or has it? Sightings of this mystical beast were first discovered on the Digital Roar blogsite. The baton was picked up by Wow Insider and of course once the rabbit was out of the bag it is now all over the internet.

On any other day this would not be an issue, Blizzard regularly uses pop culture throughout its games and in particular WoW is littered with such references.

The date posted was of course 1st April but having checked WoWHead it all seems to be quite genuine. There is a a debuff Huge Sharp Teeth, and an achievement That Rabbit's Dynamite.

I for one am hoping it is first genuine and secondly that it makes it to the final release.
Posted by Bob at 09:57