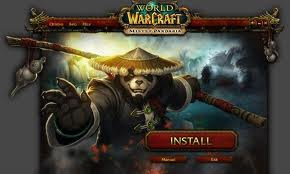 Beta testing is not something I have enjoyed a great of success with. My only previous experience was highlighted here. I have already stated that I am currently experiencing a bit of a lull in the game and am not overly excited about the new expansion, so why would I bother to download and install the beta version. The answer lies with the one I promised not to ever answer my kids with, "because I can". The current expansion is winding down and several months ago I signed up to Annual Pass. At the time I took the decision that I would still be playing in 12 months and that a free Mount, a free copy of Diablo III and beta access was a gift for doing nothing that I hadn't done for 7 years previous.

When the e-mail arrived my curiosity got the better of me, and besides the world and his wife already appeared to running around as Pandas. The process is summarised below.

As usual with digital download nothing ever goes that smoothly. There is need to open up firewall ports all of which is done automatically on your say so like the old method for downloading a patch. The download is Peer 2 Peer and takes a long time for the 30+ GB of data to download. My copy encountered the standard Microsoft code  stop: 0x000005c which means that it is not Microsoft's fault and it either hardware, 3rd party software or antivirus software (nothing like blaming everybody else). Fortunately the day before I had read a blogpost by Alto, I tried all the steps up to and including step 4. This involves finding the battle.net folder and renaming it to battle.net1 (Win 7 is located under C:\program data). Restarted the launcher and off it goes again. I now have folders have folders battle,net, battle.net1, battle,net2, and battle.net3. As you can see it's not a flawless install.

The starting screen is slightly different than the old screen, I dabbled with Male and Female Panda Monks just like 99% of the rest of the testers and then paused over a name. Usually I have a name before I choose a character and this time I just sat there and pondered the options. Everybody else has a Panda beginning with the letters Pand, I decided this was lame and the chances of getting a unique name were going to be quite slim. In the end I generated a name using what Pandas like to do most and the famous book by Lynne Truss - Eat Shoots & Leaves. The resultant name is Eatshootslea, which I am more than happy with.

The starting zone is pure chaos and for the unsuspecting and the slightly stupid (me included), the game is hideously laggy. The install in its infinite wisdom and with Blizzard wanting to show off the textures and artwork of its new creation have defaulted the graphics settings to max. By moving the slider down to fair, the game leapt from 3-4 fps to my more standard 20 fps. I have heard commentators suggesting that if your current computer setup is ok, then there will be no need to upgrade for the new expansion. I personally feel that to enjoy the game to the max, an upgrade from a borderline nVidia card like mine is well worth considering.

Email ThisBlogThis!Share to TwitterShare to FacebookShare to Pinterest
Labels: beta, Mists of Pandaria