(I'm Not Your) Steppin' Stone 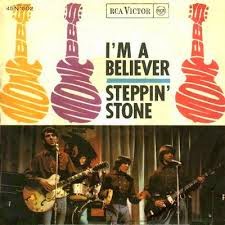 I can safely say that I am not as well immersed in all things Blizzard, as Alternative Chat, and not being in the Beta I am taking her word as gospel because quite frankly I trust her opinion. The issue at stake is multi-platform franchise story telling. Whilst I do not know exactly what Blizzard have got up their sleeves they do at least have previous from the last expansion.

Once upon a time Warcraft was a RTS (Real Time Strategy) game in the Command and Conquer, and Age of Empires style. After 3 such iterations of the game they took the franchise to new heights and created a MMORPG using the storyline from the 3 RTS games embellished with additional storyline from 60 Levels of questing and there was the game.

To which the common consensus seems to be 'No'. This does not mean that we do not understand the Lore, we learn and assimilate through the act of playing, this is after all a computer game. My understanding of Mannoroth, Kil'jaeden, Medivh et al, can be fairly sketchy but I know enough for the game to still make some kind of sense. I have killed Hundreds of Bosses but the only ones that I really knew anything about where the Lich King and Deathwing. Garrosh Hellscream is a Horde leader and as such I have little knowledge other than he is completely unhinged.

The first faux pas Blizzard made in the story telling department was the gap between Cataclysm and Pandaria, which is incidentally were they chose not include a pre-expansion launch event. Instead Blizzard offered us a Book - "Tides of War" and the scenario "Theramore's Fall" which is a euphemism for dropping a Nuke on your enemies head. All this was covered in my post "Letter From America", which includes links to Grumpy, Alternative Chat and Blessing of Kings.

In summary Blizzard told a large chunk of the story in "Tides of War" by Christie Golden, apparently she is a far better writer than Richard A Knaak, (who is a less talented writer than my 9 year son) and spoiled the fiction side of Warcraft for me years ago. The result was several major characters disappeared, died, turned to Crystal/Stone without any explanation in game.

World of Warcraft is still played by 6.8 Million people and the best guess for the book franchise figures is about 100,000 copies. Now you don't need to be Will Hunting to work out that leaves a lot of people unaware as to what happened to King Magni Bronzebeard? Why is Blaine Bloodhoof in charge of the Tauren? and who died at Theramore Isle?

Already "War Crimes" by Christie Golden covers the trial of Garrosh Hellscream, and no doubt another book will cover the Time bending Multi-verse that Warlords of Draenor is going to become.

I read Blogs and Newsites for gossip about WoW but there are many thousands of people playing this game that logon at the weekend for a nice relaxing leisure pursuit. We should not have to be trawling through forums, twitter, facebook, books, comics, youtube and any other media you can think off just to play a game and not to feel that there are huge gaps in the storyline.

Marvel might be branching out into multimedia but at the end of the day, it is a comic with a movie franchise attached. World of Warcraft is a computer game, with a possibly movie franchise at a fledgling stage and well establish book and comic following, but the core business should always be about the computer game. Use other media, if it helps your revenue stream but don't forget the 6.8 Million that still pay a subscription every month.

I want to know why they did not string Garrosh up by his testicles? I want to know who helps him escape? why they go to Draenor? and why 35 Years ago? but please tell me in game. Run through the cinematics, give me some quests, just do not pretend it didn't happen.