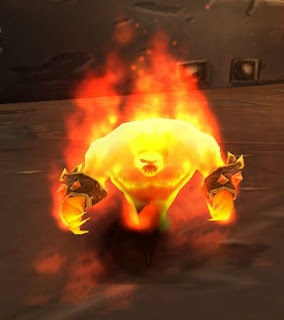 My standard Warcraft routine is Looking For Raid after the weekly reset and move round to Tol Barad and Wintersgrasp at the back end of the week. In between I will try to finish off some achievements. The easiest way to get achievements for me is to do legacy raiding. My main character has polished off Vanila and TBC (except for Tempest Keep ). Naxx is mostly covered but I changed to Shaman healer for the other 3 raids in WotLK. A 10 or 25 man Ulduar would uncover a plethora of achievements for me. These forays are few and far between so I often fill my time trying to get furry cuddly companion pets.

Blizzard armory made the job far easier for the average Joe by showing what pets are owned and which are not. Of the 4 pages of pets many are specials Collectors Edition, Blizzard Store, Blizzcon or Trading Card Game. These Pets are lost to me and unless I become a Diablo III millionaire I will never own them. The remaining obtainable pets are World Drop, Seasonal, Darkmoon Faire, and Argent Tournament.

World drop are a pain in the backside and I have no stamina for endless farming. The only pet I regularly try for is the Fox Kit. This can be done whilst killing spiders (lovely skinnable spiders) in Tol Barad for commendations.


Seasonal pets are mostly from Children's week. I missed the first 2 events and spend subsequent years chasing the pets. Every year they seem to add more, but hopefully I will catch up this year I am still missing 5, Curious Wolvar Pup, Legs, Peanut, Scooter the Snail, and Whiskers the Rat.

On the subject of boring or just plain annoying dailies, you can't beat the Argent Tournament. There was nothing wrong with several of the quests, ie. go here and kill bad people come back and get reward. The big problem was ride a mount and try and knock someone off. The problem I found was that I could get a lead and then lose all my shields by going for the kill and not keeping a close eye on the defence, and then it was game over. This was like a chess match but it seemed to last for much longer. To get to become a champion takes some considerable time but with all those pets on offer, I might need to review my strategy.

Last night with very limited playtime I decided to the The 'Unbeatable?' Pterodactyl: BEATEN achievement. Everybody I know hates this quest and the Jousters fly like a gold brick, but it's only 10 very annoying quests to get through. I am currently 6/10 of the way through it. After this high octane excitement, it was off to the Molten Front. The reason for this legacy activity is to hope that one day Zen'Vorka will give me his cache and it will have something of use in it. At 30 Mark of the World Tree, this has not been a very happy exchange. This time was different the RNG gods shone down and awarded me Scorched Stone. The best bit is I now have no reason to do these quests again except on my Gnome Rogue Engineer who needs the recipes especially the Flintlocke's Woodchucker.
Posted by Bob at 13:40