Lawn of the Dead 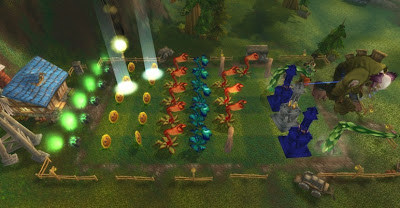 It is rather shocking how somebody can spend so much time immersed in a game, and when not playing, reading as much information as possible, and still be totally clueless about some aspects of the game.

On my Hunter I have practically done Loremaster twice. I did the achievement pre Cataclysm and then to get the achievement for the questing in all the zones repeated the feat again. So you think I would be aware of 99% of the quests. Well over the last few days I discovered a huge gap in my knowledge.

For those trying to obtain as many furry little companions as possible you might have come across the Singing Sunflower.  This is a quest reward from a small chain of quests in the Hillsbrad Foothills just south of the Dalaran crater. Admittedly there is not much reason for any Alliance character to be in this part of the world.

Wowwiki describes the quest chain as "The Lawn of the Dead quest chain is a series of 5 quests that begin and end with Brazie the Botanist in Hillsbrad Foothills. Each quest zones the player to an instanced area, and allows them to play a game within the game, based on the popular internet game "Plants vs. Zombies". The interface changes giving you a new toolbar that allows you to use seeds. Once the final quest is completed, the player receives Brazie's Sunflower Seeds which teaches the player how to summon a new Cataclysm companion called the Singing Sunflower or Brazie's Sunflower."

On first read this translated as blah blah blah. So the upshot is that we have meta game based on another game that I never seen, that helps lots. The first few levels are relatively easy ramping up to the 4th and 5th which are very challenging. I failed the last level, hearthstoned to Stormwind and logged off WoW. I fired up Google to do a little research on improving my performance and found this on You Tube. I was fired up and wanted to log back immediately but it was late and my character was in Stormwind, this would have to wait.

As usual with these silly little games, I get very addicted to them and if I go to sleep soon after playing then I will dream about playing them. The original game that gave me such vivid dreams was Tetris. I used to rotate random shapes in my dreams. This time it was rows of triffids fighting zombies.

The next evening the first thing I did was login and wander off to Hillsbrad. Following the You Tube film the tactics worked a charm. So anybody having problems you know what to do.

The strategy is on the lines of 2 columns of sunflowers this will provide enough energy for all your needs. Columns 3 and 4 use the red spitting triffids. Column 5 use the tentacles. Replenish when Stilwater makes your plants wilt.

Hand in quest and enjoy your singing Sunflower. Writing this makes me want to do it again on a different character. I might even look up Plants v Zombies. I foresee a night of vivid dreams ahead.
Posted by Bob at 10:07