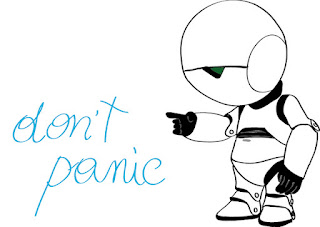 "Marvin: Life? Don't talk to me about life!" Hitchhikers Guide to the Galaxy.

It's been a strange old week in the Blog World. Having spent a few months writing blog posts for nobody but me and a webcrawler based in Russia, I have suddenly found visitors at Altaclysmic. Since joining NBI, I have seen a steady increase in the numbers and received a further boost with a link from Biobreak. Possibly the biggest shock of last week was earning a comment from Tobold, I guess it was not a shock that he found me after I wrote a post which included a whole paragraph from his recent post on the NBI.

I started this blog which is not my first, as a means to pass a little time during my Lunch Break. Nobody expects to get visitors when you start, but also you are quite surprised when the world does not discover you as the next big thing. I believe this is how every Rock Band/Musical Troupe must start off on their careers. Most of course do not last the course disillusionment, boredom, and in fighting, only the chosen few make the grade. Authors are a similar breed, and every person believes they have at least one novel in them.

Tonight I am going to see Justin Currie in concert.  Who is that you might ask? Well Justin was and still is in a band called Del Amitri. He is a bit more cerebral than the average rock star, but he also seems to be suffering from a certain amount of mental angst. The band achieved a certain status in the Rock World, but never moved on to global stardom and eventually got axed by their record label. Justin seems a little bit angry at the world and is very self-deprecating (see link to website), but at the end of the day he is still making music and playing in front of his fans. I am sure most people would love to trade places with him.

Anyway back to blogging, if you have any designs on blogging, just do it. Tobold pointed out that if you want the massive number of visitors then find a hot topic, A new game (Diablo III) find your niche and pull those visitors to your website, just be wary that the more niche the subject the more narrow your topics are going to be. Tobold and Gevlon have both sacrificed number of visitors in favour of writing about something else. In fact Gevlon has done this on more than one occasion. BRK now only writes the occasional entry, and mostly on a cooking theme.

Do you want the numbers, or do you want to write about something you care about? Personally I am going to write about whatever comes into my head. If you like it, then good, if not, then there will always be another post that might interest you. We all want more visitors, but at the end of the day Don't Panic, because Nothing Ever Happens, Nothing Happens at All.