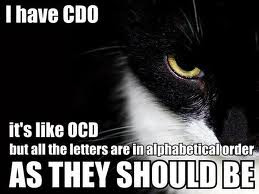 It's not always easy to write blog posts. You get an idea and then you let the idea take root and grow. At this point you find out whether you have enough content to write about. Other times you read what somebody else as already done and take that in your direction. This particular post is taking shape in ways that I never intended it to. I am not an expert on the subject I am merely working through my own observations.
My son exhibits unusual signs of mild OCD. When asked to tidy away his items and put them in a cupboard, he will quite often start by taking out all the contents of the cupboard and rearranging items with a fresh start. My daughter would just fill the cupboard until nothing falls out when you open the door.

I personally suffer from what is termed an addictive personality disorder. In many ways this is closely linked with OCD. These addictions can manifest themselves in many ways but the most common addictions are “drug and alcohol abuse to pornography, gambling, Internet, videogames, food, exercise, work and even relationships with others.” As a gamer, everybody seems to feel the need to tell us that we are addicted to games and that we should get outside more and partake in more real life events. I am also a collector of various things like Single Malt Whisky, CD's, DVD's computer parts etc. The other thing about collecting CD's DVD's is the need to display in a alphabetical and chronological order.

OCD and Addictive Personality Disorder are usually diagnosed and treated depending on scoring systems like the Yale–Brown Obsessive Compulsive Scale. I believe that everybody sits on the scale for OCD with the vast majority of people placed at the low end of the scale. The definitions used in the  scale are as follows


"OBSESSIONS are unwelcome and distressing ideas, thoughts, images or impulses that repeatedly enter your mind. They may seem to occur against your will. They may be repugnant to you, you may recognize them as senseless, and they may not fit your personality."


In gaming terms, I would guess that very few people would consider thinking about, or having images or impulses connected to WoW or another game is actually repugnant. So from an OCD point of view we are not obsessive, but from a general society viewpoint it might be considered to be unusual or not the norm.


"COMPULSIONS, on the other hand, are behaviors or acts that you feel driven to perform although you may recognize them as senseless or excessive. At times, you may try to resist doing them but this may prove difficult. You may experience anxiety that does not diminish until the behavior is completed."


Compulsions could be seen as the need to logon to the game at every opportunity. This definition appears to be more pertinent to the gaming community.


The Yale–Brown Obsessive Compulsive Scale includes many different sections which are listed below:


6.      Obsession With Need For Symmetry Or Exactness


Repeating Compulsions, take the form of routines, and repeat activities, in WoW we call these dailies or rep grinds. They are in place to bulk up the end game content, the rewards can be quite small and incremental but sufficient to encourage us to do boring repetitive tasks over and over again.
Ordering / Arranging Compulsions, this is for the people who spend hours rearranging our inventory in bags, bankspace and void storage. The latest craze for transmogging all items to obtain a certain look plays very heavily on this compulsion. The less inclined will stop transmogging for the 5 new levels up to 90 and will wait until the endgame before re-applying their chosen look.


Hoarding / Collecting Compulsions, this is possibly the most obvious part of MMO’s. The need to hoard and collect gear, pets, mounts, tittles and achievements.
Do MMO’s attract people with OCD?  or are the games companies slowly turning people into obsessive compulsives?


Much has been made of the business world trying to tap into the computer game reward system. The business terminology is called “gamification” and is an attempt to reward effort, performance and loyalty with more than financial incentives. Modern life is going to try to tap into obsessive compulsive behaviour in an attempt to maintain brand loyalty and familiar shopping patterns. The more industrialised the environment the more likely that OCD will occur. 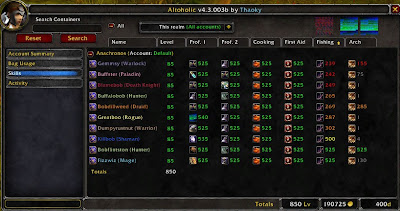 The screenshot above taken using the Altoholic addon, is an example of my own obsessive compulsive behaviour. The first thing you will notice is that all the primary professions are maxed out, and so are Cooking and First Aid. I have set myself strange goals to be completed before the next expansion. One of these goals is the achievement of 261 fishing skill. Why would I set such a figure? that is when the red turns to orange. Does that make any sense to you? Well to me red is an abrasive colour. A random internet dictionary states that red symbolises,

"Red symbolises intense passion,aggression,and courage. It can also symbolise sexual impulses, danger and shame. Red is usually not a favourite colour for negotiations or meetings and is great for drawing attention to things."

Maybe it is the shame, I don't know but it is driving me on to achieve a target.

The next thing that strikes me is the lack of effort I have put into archaeology. My head tells me that it is a wasteful skill with no merit or benefit but I still feel the need to raise all my characters to at least 100 points no doubt that will then turn into 150, 200 or even 261.

The other problem I have, is that I am also inherently lazy and will seek the passage of least resistance. This can be compensated for by the obtaining of two targets at the same time providing they have a reasonable level of compatibility. In this case, I have a need for low level herbs, so I can herb and dig up ancient sites for buried treasure at the same time.