Leader Of The Pack 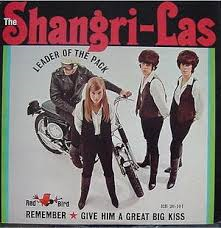 Playing the current WoW expansion, has left me with plenty time on my hands, the current content (Thanks for the content patch Blizzard). I have filled this void by utilising the Roster slots created by the merging of my Realm (Anachronos) with 2 others (Alonsus and KulTiras). This allows for 22 more slots and Death Knights, with the added advantage I can stay in the same Guild (they are used to my little foibles by now).

I have now maxed a Horde character and the one class that was missing off my Roster, which was a Shadow Priest. With 16 max level characters and 5 of them being Hunters, it was time to revisit some of the other classes.

My latest creation is the very odd looking Ronron. 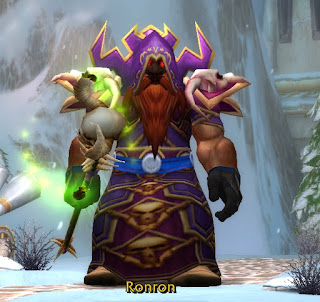 A Male Dwarf Mage, with fiery red hair, beard and eyes, and a rather fetching purple dress, showing off those bulging biceps. Some of you might have guessed that I don't much go in for Transmog, but it almost very tempting with this particular clown suit. Most of the ensemble is courtesy of Heirloom items.

I know that some people hate the idea of Heirlooms giving an additional 50% experience boost, but in my experience the levelling process was broken a long time ago, and in reality who wants to spend weeks getting to 100.

Gathering professions will shower you with experience, with Archaeology being particularly generous. I am still unsure what it is that skinning did to upset the Devs at Blizzard, so my tip is stick with Mining and Herbing.

Getting around Azeroth as a young pup is always a chore, but it is noticeable that everybody has the Chauffeured Chopper, the irony is that it is a reward for collecting Heirlooms. To be honest I had no idea that I even had one. This will ease the pain of the 1-20 levels, having to run for 5 minutes to get from the Dwarven Quarter to the Mage Quarter in Stormwind.

The quickest way to level is to Dungeon Hop. Be prepared for a relatively rough ride if you are a caster. The Tank and any melee class will gather everything in the dungeon and run away with them. If you are lucky enough not to have any AoE at the lower levels or instant cast spells, you can be sure to witness the joy of your 3 second cast being rewarded by your target going round a corner or dying before you can even make a scorch mark on their armour.

Oddly enough I am happy that nobody speaks or at best notices that the 4th spot on the Damage table is always mine. It is not for want of trying, it just to be hoped that you can catch up with the Tank long enough to almost make it through your rotation on the boss.

2 to 3 levels can fly by in the short time you are underground. It is almost guaranteed that you need to change zones after the experience.